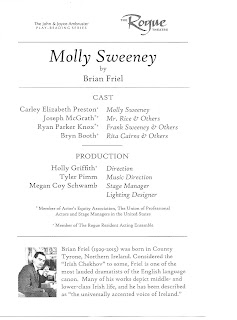 
With a big name production of Brian Friel’s  Molly Sweeney  scheduled to be directed by Robert Falls at the Goodman Theatre this spring,  we were eager to attend a staged reading of the play at Tucson’s Rogue Theatre a week ago.  Friel, who has often been called the Irish Chekhov, had a long and distinguished playwriting and literary career.  We remember fondly seeing his Dancing at Lughnasa some time ago.


Molly Sweeney  is the story of a middle aged Irish woman, blind almost from birth, who is given minimal sight in an operation by a surgeon looking to rejuvenate his career. The original show features three players doing related independent monologues without interacting. They are Molly, of the title, Mr. Rice, the surgeon who does her eye operation, and Frank, a man with a thousand failed causes, who marries Molly and tackles the task of trying to re-educate her to the sighted world.


Director Holly Griffith did make a few changes in the casting for this staged reading.  She used a four actor cast and doubled Mr. Rice, Molly’s father and others with actor Joseph McGrath. Actor Two, played by Ryan Parker Knox took  on the over zealous Frank and others.  Actor Three, Carley Elizabeth Preston, read Molly Sweeney.  I assume, in order to add another female voice  to the mix, Griffith chose her fourth actor, Bryn Booth, to read a number of minor women’s voices. She also chose to add interaction and reaction between the players during the reading. This added a nice theatrical dimension to the proceedings.


Reflecting now on the script,  I can see that it lays out a number of views of a significant shared event in the characters’ lives. The result is a kind of “Rashomon” effect that shows the event from each individual’s perspective.


Molly descends into a psychiatric rabbit hole after her operation, and for her the central question becomes whether she is better off remaining in her dark but familiar existence or adopting the new. The surgeon and the husband start out with firm beliefs that restoring Molly’s sight is unquestionably the right and moral path.  They want to fix a deficit in her that they see as a return to normality because they and most of the rest of humanity have had a sighted existence all their lives.


Frank, the husband, and do-gooder extraordinaire, whose enthusiasms run to importing Iranian goats to make cheese on off shore Irish islands, has failed at all his projects up to now and seems to take on Molly at the age of 40 as another of his socio-moral commitments.  Mr. Rice, the surgeon, his life put into shambles by his wife running away with a colleague, has retreated to an Irish backwater to lick his wounds. But, like most surgeons, he believes that operating is the right and proper thing to do. If it restarts his career along the way that is simply another good thing.


Every teacher faces similar issues on a somewhat smaller canvas. Many of us feel that one of our responsibilities is to take students from darkness into light by moving them to some degree or other out of their comfort zones.  Is this an unselfish goal or are there ulterior motives?  Is it always best for the student?  In the play we see that for Molly the darkness was the norm and when it was changed the results were not positive.  Changing her way of seeing broke her world beyond repair instead of fixing it.  As my wife observed, an obsession on one person’s part, even though noble and moral, might not affect others in the same way. Given that “Obsession” was this year’s Rogue Theatre theme, this reading certainly supports the themes of some of their earlier productions-- especially the adaptation of Moby Dick which we saw last month.


There were other interesting observations made during the discussion period after the conclusion of the reading. One man said that the story had a clear Icarus feeling. Getting too close to the sun can create a heated brilliance that destroys and melts your wings.


Another woman commented on the feminist implications in the play since it   depicted how men (Dr. Rice, Frank, and Molly’s father) continue to foist their sense of what is right and proper on a woman.


The critic, Michael Billington, in a Guardian review of an earlier production, also reiterated a general critical comment that most of Friel’s work centered on Irish attempts to escape from darkness.


Ultimately what does Molly have to lose?   Maybe everything, say some.  Frank is less self aware in the sense that he simply reacts by setting off to Ethiopia on another probably hopeless adventure.  Dr. Rice seems to have a better perspective at the end by at least saying.  “I’m sorry, Molly.”

In conclusion this was a project well executed that also provided thought provoking comment about the text from the audience.  It is one good reason why the work that the Rogue Theatre does is so satisfying.