Review THE WOLVES by Sarah Delappe

THE WOLVES by Sarah Delappe 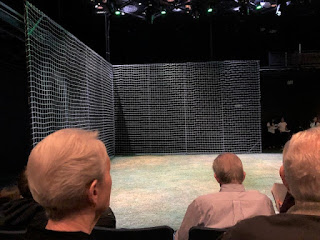 The set features two mesh walls with a central exercise area and the audience arrayed on the other two sides.  Some productions have ringed the entire playing area with mesh or screens. I prefer this solution as it gives you a clear unimpeded view of the actors.


The Wolves by Sarah Delappe  is ostensibly a simple show with a simple set. Nine members of a girl’s club soccer team in an unnamed American city go through practice warmups and a string of personal conversations about everything from menstrual blood to the Khmer Rouge.  It has been one of the most produced plays of the past year and this production was by the U. of Arizona’s Repertory Theatre (ART) and features students in their School of Theatre.


The girls in the cast prance in like prize polo ponies and start their pre-game warmups amid a vocal mashup of voices.  There is some Irony here as the last show I saw in the Tournabene Theatre was Top Girls and Caryl Churchill is probably the modern master of overlapping dialogue.


Luckily your ear soon becomes accustomed to this real and sophisticated form of natural speech.  That enables you to see how these adolescents are revealing their individuality and rank within the boundaries of the Pack (Remember the title is The Wolves.)  All the while each girl is also working on attaining or retaining their acceptance within the pack or team.   The metaphor is potent. The girls are also facing the universal trial of integrating into the world of adulthood, which is represented by the invisible coach, college scouts, their parents, the fans who watch the games, and the audience in the theatre.


The actors are identified only by their shirt numbers and in the group spirit of the show I will not highlight any of them. They are all game, talented, and well suited for their roles. It is only fair to keep them equal as they are all ultimately fighting the same fight.


But that does not stop me from putting together a profile of each of them by virtue of behavior and comments. I was particularly conscious of categorizing them to keep them apart while they were trying to do the same thing within their group. Here the work does begin to look a bit like a typical war movie. Common  types jump out. First there is the division by position (stryker, goalie, forward, etc,) then there are behavior types like leader, sidekick, bad girl, bright one, bulimic, and of course there must be a newcomer. In this show she has the additional difficulty of living in a yurt that the girls all call a “yogurt.”  It is intriguing, however, that when they do jog off in formation for the playing field they do submerge their individual trials for the team. They focus off stage not on each other and metamorphose into a machine that exists to play and win.


As the team moves through the season, complications like an abortion, an anxiety attack, or a disabling injury arise.  A problem here is that these small crises don’t impact every team member at the same time or with the same intensity. The playwright finally does have to resort to an outside tragedy (a literal deus ex machina) in order to move us to the finish. In spite of this expected “let’s all pull this out” ending, the play still does put its fingers on the pulse of young girls growing up and trying to figure out who they are and how they going to deal with the world and its attitudes toward women. It remains an inventive and compelling evening for the audience and a challenging outing for a director and young actresses.  And now It’s time to go out and score some goals.