On Oct 22, 1805, at what is now Mile 205 from the sea on the Columbia River, Lewis and Clark camped near a  thundering set of rapids and falls. It has been called Celilo Falls more recently, but they called them the "great falls" and below is the map that William Clark drew for his journal. 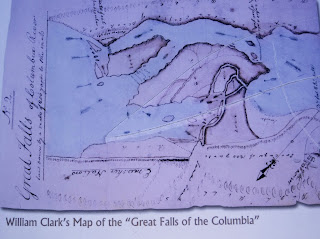 The native residents, however, had named the falls long ago. They called them   "Wy-am " meaning "echoes of falling water."  Archaeologists now know that over  thousands of years this spot had become legendary for  fishing, trading, and socializing.
This is a view of the river at a pull off on the highway where our guide Roger Downs is lecturing about the geology of the river, its falls and rapids, and their demise. 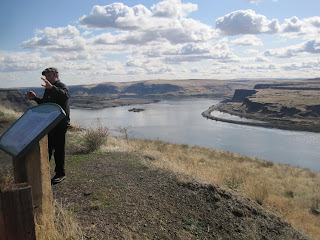 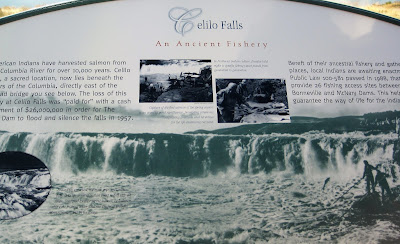 on Oct. 23, 1805 William Clark wrote in his journal, ""We were obliged to let the canoes down by strong ropes of elk skins." 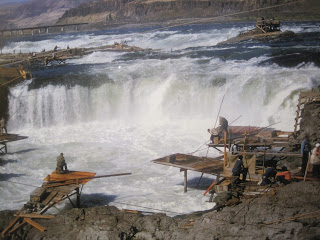 And here again is that picture of the pull off  just referenced a moment ago. Those falls and rapids pictured in the previous two photos are now some 50 feet below the surface of what is now called Lake Celilo.  In 1957 a few days after the floodgates were closed at the recently finished Dalles Dam, Celilo Falls and the historic remains of two ancient Indian villages ceased to exist. The compensation paid to the native peoples for this destruction  was 26.8 million dollars.

The waters are now calm and beautiful, but the price was high and fueled by the tears of generations. 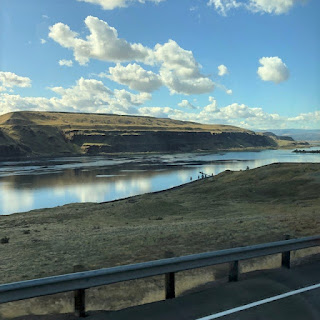 A few more miles downstream at The Dalles  we stopped to visit the Columbia Gorge Discovery Center and Museum. It is a modern building 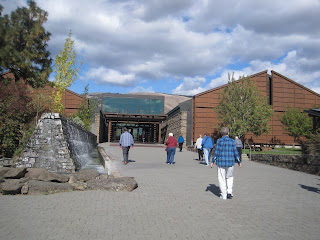 with a large central hall that has a basalt path of the Columbia River on the floor. 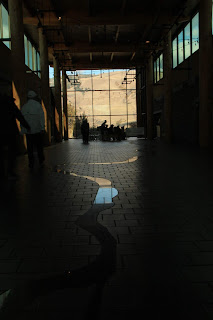 There are several rooms of exhibits dealing with the history and geology of the gorge.
It is also home to a Raptor Center that treats injured birds of prey that can no longer live in the wild. We had a nice presentation by a young staff member. 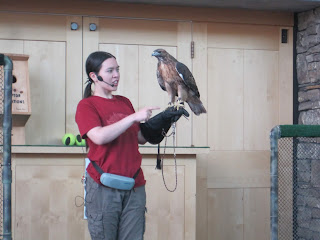 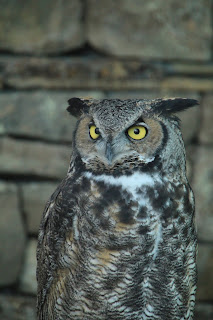 Not too far past The Dalles Dam (around mile 178) and now in the pool created by the Bonneville Dam we passed another submerged native site.  There is not much left of a piece of land that used to be larger and used to be the Lower Memalloose Island Native Burial Site 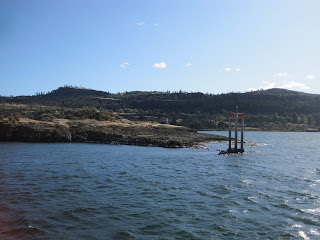 At mile 170 we approached The Hood River Bridge, which has to be raised for larger commercial traffic. 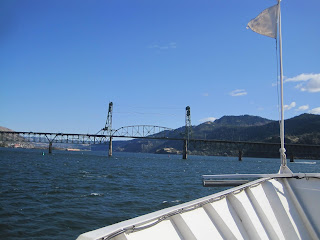 It was a reminder that the dams and the bridges are now king.  Commerce rules and a still vital logging industry is fueled by the still plentiful downstream forests. 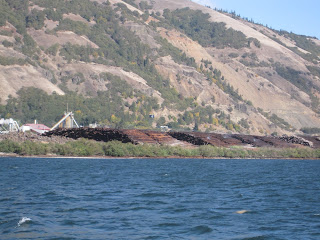 Rail and auto traffic is now constant along the river.  The routes and rails have been literally blasted through the basalt. 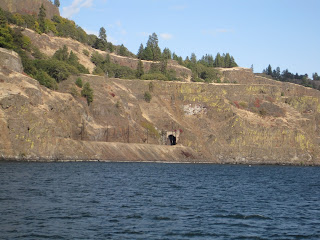 Next up in Part VII is a visit to the Bonneville Dam and Multnomah Falls.
Posted by DramaJim at 8:36 PM