Jim and Jan's Christmas Letter for 2919

Now down to what’s what for this past year.  Jim and Jan still do most things together. We work at the Warren County History Museum, we support the Friends of the Library, we  attend meetings of the Warren County Democrats, we shop together,  share the cooking, and read widely and avidly.  Jan is a life member of the American Association of University Women and spends mucho time on  Equal Pay,  Voter registration,  and STEM projects. If she  hadn’t taken a tumble on the way to the Monmouth College Christmas Concert the other night  and sprained her wrist, the entire year would have been hunky dory.

Jim continues to try to keep up with the theatre scene, write in his blog, and work with Rotary.  He has found a new to him detective series by Louise Penny and has been trying to read all the earlier ones. Two major projects this year have been organizing an open house  for our 60th  (can you believe it) wedding anniversary  and taking a Road Scholar Small Ship Lewis and Clark cruise on the Columbia River.   You can read more about our trip and see pictures right here on the blog. Look in the archive of posts on the right and open Novembr. From there you can find post number 1 and go through the whole trip.  Monmouth is still our home, but we did also manage a three month getaway to Tucson last winter.  With a bit of luck we shall head back to the Southwest shortly after Christmas.

Break time for a  theatre funny:  “ If the police arrest a mime, do they tell him he has the right to remain silent?”

Meanwhile, in a galaxy far far away, the  Helsinki Finns (son David     daughter-in-law Lotta, and our two granddaughters Frida and   Selma) continue their life abroad.   We saw David briefly in Minneapolis last summer, but have not seen Lotta and the girls for over a year.  Both the young ones are growing  like weeds.  Frida is 7 and  is now in school. She is taking music lessons and has just passed her first swimming test. Selma is 4 and goes to what the Finns call  Paivakotti.  She loves to dance and sing and draw.
We are  looking forward to a visit from all of them in Tucson in February.  Lotta continues her therapy practice and David continues to work for the Kone Elevator company, which was mentioned in a recent article about life in Finland in the New York Times.  He will also be participating in a  low-residency New York University MFA  program in poetry beginning in January.

Time for another intermission:  Did you know that the term “piker” meaning cheapskate or cheater grew out of people who tried to evade the cost when they came up to a pay station on the first toll roads?

Back to business. The Brown family of Amy, Todd, Taylor, and Mikel all still hang out in Iowa.  Todd, on the left,  had had a good year until two herniated disks put him in the hospital for emergency back surgery.  Up to that time he had been given more supervisory duties at his work, went on a major fishing trip with friends that netted the family and us some delicious salmon fillets, and rode his Harley to the Sturgis SD Motorcycle Rally.  Amy, on the right) remains the caregiver for all humanity and she has had a workout this year with Todd’s back, Jan’s fall, and various friends with problems. School for her this year has blessedly been an upper as she has a smaller and better class.  She is also taking a couple of continuing education classes to keep her certification up to snuff. 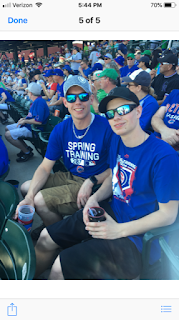 Grandson Mikel,on the right,  is a senior in High School  and will be doing his final year of baseball this spring and summer.  He is still working part-time  at the Play Station and somehow he and Mom and Dad have also  been doing the “looking at colleges” dance.   Mikel’s current interest is in the wildlife and environmental management area. I think he would make a wonderful park ranger.  Grandson Taylor, on the left, has finished his formal education for now and is working full time as a nationally certified Paramedic in a small town near Des Moines, while also doing some hours with some old friends at the Hiawatha, IA,  fire and rescue department. He is a busy young man with a crazy schedule. The picture was taken at a Cubs Spring Training game last March.


For my final funny of the year let’s ask this question.  Why do they lock gas station bathrooms?  Are they afraid someone will clean them?

Thanks once again for reading our letter this year and for many of you over many years.  May you find great joy and blessings in the promise of this Christmas Season even in these troubled times.  Think about keeping only cheerful friends; grouches tend to pull you down to their level.
Merry Christmas and Happy New Year!