Chap XI The End of the Journey at Fort Clatsop

Chap XI The End of the Journey at Fort Clatsop

After making the decision  in the Middle Station Camp  to cross over to the south side of the river a scouting party, with the advice of the local Clatsop Indians, selected a site on a spit of land that was not far from the ocean and just off of Young's Bay on what is called today The Lewis and Clark River. They made camp there on December 10th and commenced the building of a stockade and living quarters for the group. They were able to move in just before Christmas of 1805.  The fort was to be the Corps of Discovery's  home until they left for the return journey to St. Louis on March 23, 1806 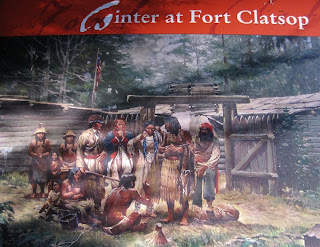 Today the camp area is operated by the National Park Service as a National Historical Park. There is a visitor center, several walking trails, and a reconstructed replica of the original fort. 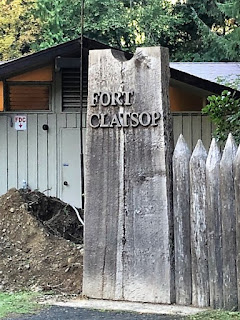 The plan for the fort was simple. There was a central courtyard with living quarters flanking both sides. As the diagram shows, the enlisted men lived on the left side and Lewis and Clark and Charbonneau and his Shoshone wife Sacagawea with their baby boy lived on the right side. 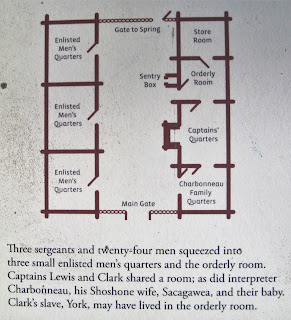 Here is the entry gate into the courtyard. 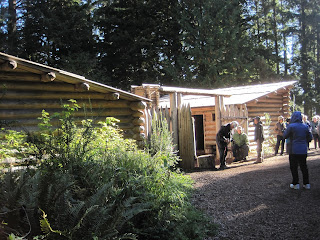 Here is the courtyard itself. 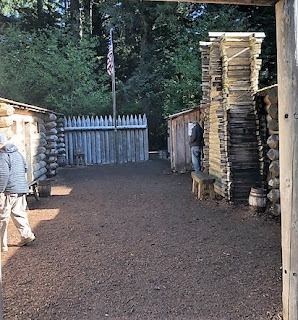 One of the enlisted men's bunkroom 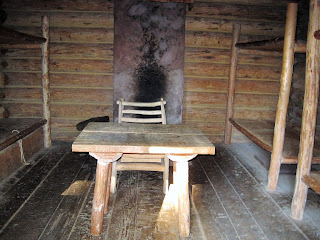 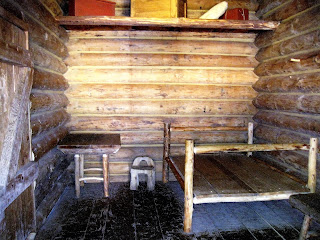 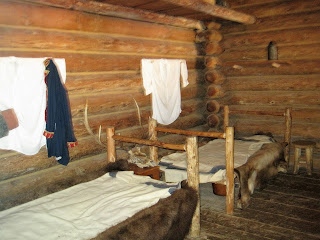 The Orderly room also may have been where York slept. 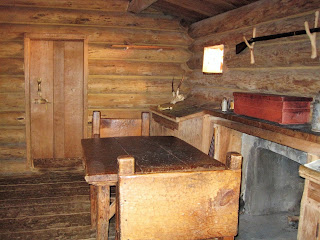 There is an interesting statue of Sacajawea on the grounds. 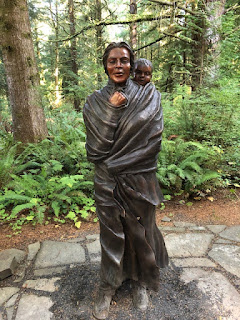 In some ways she has become the most memorable person in the expedition. Clark saw her as a significant contributor. The native tribes who encountered saw her as a symbol of peace since a woman would never be a part of a war party.  She literally kept the party alive since her knowledge of native plants and roots helped to feed the men when game was not to be found. Since she was a Shoshone who was kidnapped as twelve year old, she was able to recognize landmarks in some places that no one else in the party had seen.  She was able to translate from Shoshone to French which her husband could then translate to English for the rest of the party.  And finally she had been able to negotiate with her Shoshone brother to help secure the horses necessary to cross the mountains.  Without that single contribution the expedition might have had to turn back or even worse perished in the mountain winter.


Major cooking and other activities were often apparently done outside of the compound. 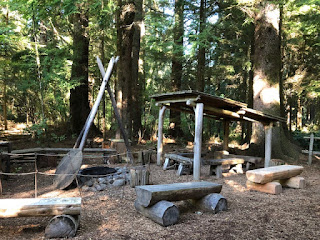 Unfortunately, the winter on the south side of the Columbia river did not prove any more pleasant than on the north side. It rained constantly and there was a continuing battle with fleas and other insects. Sickness, ranging from intestinal problems to venereal disease, was a constant threat. The entire party was more than eager to start on their return journey as early in the spring as possible.

And thus ends our journey on the Lewis and Clark trail. It was full of natural beauty, we learned a lot, and we met a marvelous group of fellow Road Scholars. As our ship left Astoria in the early evening of Oct. 10th the sun was setting in a final farewell. The white spot on the picture is a reflection off the dining room window  not a flying saucer. 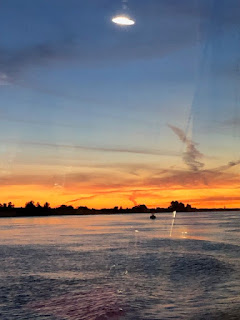 By morning we had docked back in Portland and after our last shipboard breakfast we were on our way to the airport for our flight back to Chicago.  If you would like to know more about the trip or Road Scholar in general, please do not hesitate to e-mail me at dramajim@gmail.com.