The Bonneville Dam and  Beacon Rock

The Columbia Gorge is a scenic wonderland and also a climate border. As the river punches its way through the Cascade Mountains the weather shifts from the more arid irrigation dependent upper reaches.to the rain and humidity of the coast   The warmer moisture ridden ocean air hits the coastal mountains and drops its rain and snow on the western slopes.  You see this immediately in an increase in green vegetation and trees on the hills and river banks.

Until 1896, when the Cascade Locks were constructed in this part of the Gorge, navigation remained difficult.  There could be as much as 70 feet difference in the river levels between spring and fall. The  Bonneville Dam and Lock was constructed by the US Army Corps of Engineers just below the old Cascade locks and opened in  1938--the year of my birth. It has been changed and augmented over the years and is still operated by the Corps 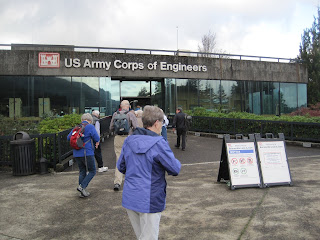 Here's a photo of the major spillway. 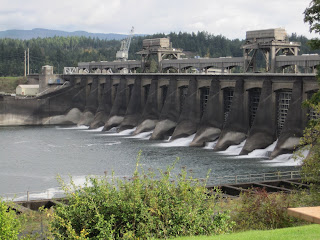 Here you can see a model of the initial dam area that shows the navigation lock, Powerhouse #1, and the Spillway. 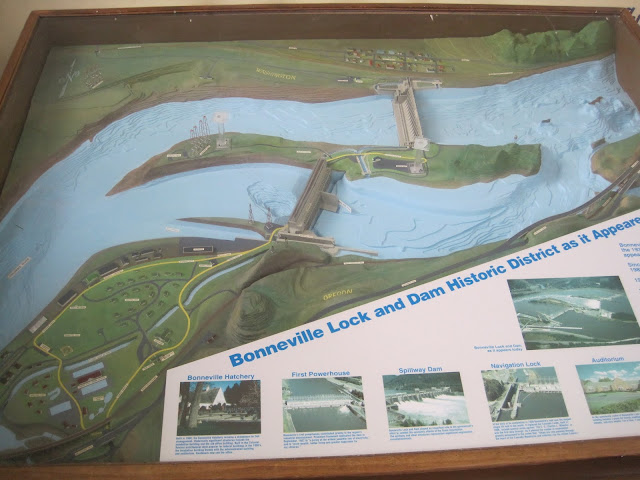 Our visit  started with a lecture at the visitor center. 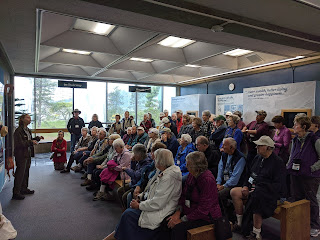 We then took an elevator down to the observation area to get an up close look at the  Bradford Island Fishway or ladder. 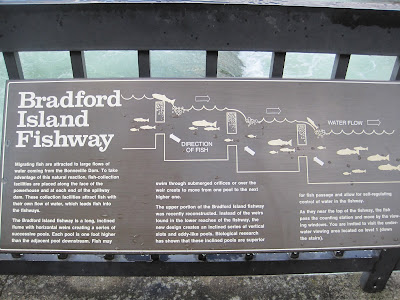 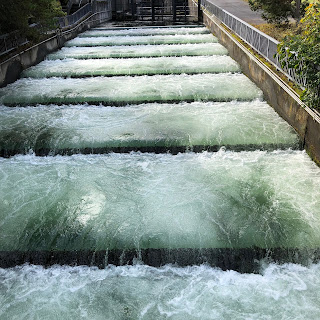 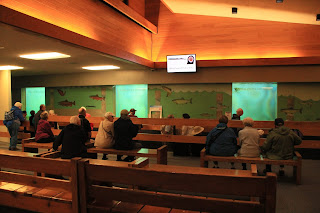 Yikes, there's a big one. 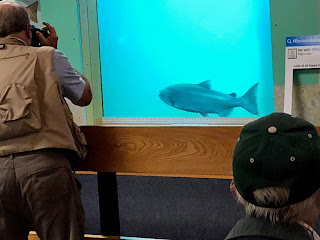 Off to one side of this viewing room is a private area in which hired fish counters monitor the fish passage up the river. They count the number and identify each type of fish that goes by their window.
After learning some more about the nature of the fish ladders and the census process, our ranger took us on a short walk to Powerhouse #1 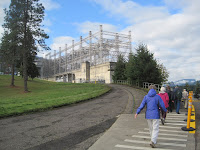 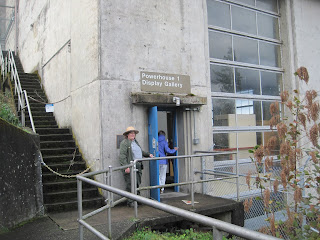 This generating station was completed in 1938 and had additions in the early 1940's. A second powerhouse was built and went on line in 1986.  Together the two plants can create over 1200 megawatts of power. 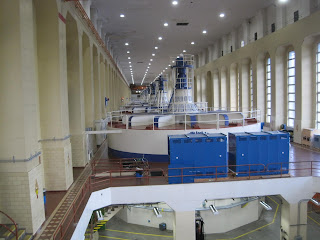 The current navigation lock has only one chamber and uses the more traditional swinging doors. We are in the lock and looking upstream. 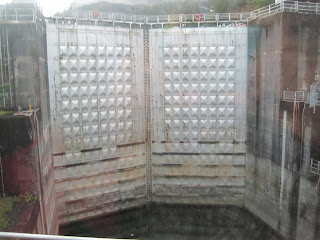 Here we are heading out of the lock and into the lower river. There are no more dams all the way through Portland, OR and to the Pacific. 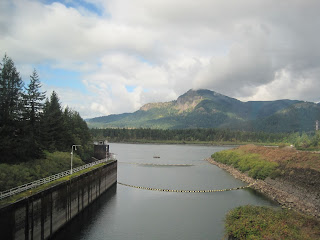 A few miles downstream from the Bonneville Dam and Lock, we were able to get a nice view of Beacon Rock.  This 848 foot  basalt volcanic plug is now a Washington State Park and there is a popular  mile long switchback trail that leads to its summit. It is an important marker on the Lewis and Clark journey  not because they climbed it (neither did), but because it was while camped near there that they started to find the first measurable tides on the river.  It was now clear that they were getting closer to their final destination--the western ocean. Like many natural features this one has gone through some name changes over time.   Native Americans called it  "Che-Che-op-tin" which basically translates as "the navel of the world."   That was a pretty good comparison as the basalt plug actually was the core or belly of an ancient volcano.  Lewis and Clark first called it "Beaten Rock" probably because it was so rough and weathered. That name was changed to "Beacon" by an early editor. It was also called Castle Rock for a time before being officially named  on maps as "Beacon Rock" in 1915.  If you need more on this massive landmark check out the website below.
https://www.wta.org/go-hiking/hikes/beacon-rock   This site also has a wonderful picture of the river taken from the top of the summit trail. 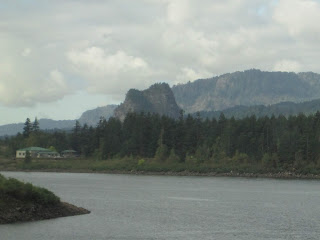 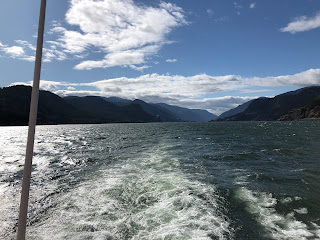 Hey, let's run on down to Multnomah Falls.  Sorry, you'll have to wait for the next boat in Part VIII.